RUSH: Now, President Trump has tweeted two things last night around 9:20. "Next week," he says, "ICE will begin the process of removing the millions of illegal aliens who have illicitly found their way into the United States. They will be removed as fast as they come in. Mexico, using their strong immigration laws, is doing a very good job of stopping people" at their southern border "long before they get to our Southern Border.

"Guatemala is getting ready to sign a Safe-Third Agreement. The only ones who won’t do anything are the Democrats in Congress. They must vote to get rid of the loopholes, and fix asylum! If so, Border Crisis will end quickly!" You know, that's not an exaggeration. Aspects of the illegal-immigration crisis could be fixed inside of 20 minutes with the reform of asylum laws and getting rid of the Flores agreement, which is what mandates separation of families -- and it predates Trump. It goes all the way back to Obama.

But there's this group of hate-filled... I can't... Folks, I can't imagine what it would be like to be a liberal today, not just from the standpoint of what they believe. But can you imagine running around all day being so filled with hate and so constantly enraged and angry? There's a group of these people that has devoted themselves to making sure Sarah Sanders does not get a job anywhere in the private sector. They are sending threat letters. You know, just like these now-failed advertiser boycotts. They're using the same techniques, the same tactics.

They're bombarding businesses. It's about 10 or 12 people made to look like tens of thousands. They're bombarding businesses with their demand that Sarah Sanders never be hired for anything because she is a reprobate. She lied. She personally oversaw the separation of children from their families, illegal immigrants at the border. This group of people... I forget the name of this the group, but they are totally... We don't have anything like this, and we need to. We're not on that field of battle. They're constantly urging/demanding boycotts, pressuring this, pressuring that. And in the process, they get to define what "normal" is.

And in their world, Sarah Sanders is abnormal and doesn't even deserve to have a job because she worked for Donald Trump and helped him separate families at the border. These CEOs and these marketing people at all these companies that are being bombarded here are deluged with these emails -- and you know how this goes. I mean, when you are faced with that kind of rage and anger and it appears to be irrational, most people in this day and age cave in to it, rather than telling them to go to hell and it's none of their business who works at this company or where we advertise or anything else.

None of this is any of your business. You can follow on all your threats to boycott all you want. But nobody says that to them. Way too many of them kowtow. Way too many of them cave. And this is... These people are totally willing to enforce on American businesses the idea that they are only to serve half the country, or whatever percentage of the country is liberal Democrat. Conservatives have more power, Republicans have more power than they know, if they started getting into this boycott business. "Oh, you're not gonna hire Sarah Sanders? 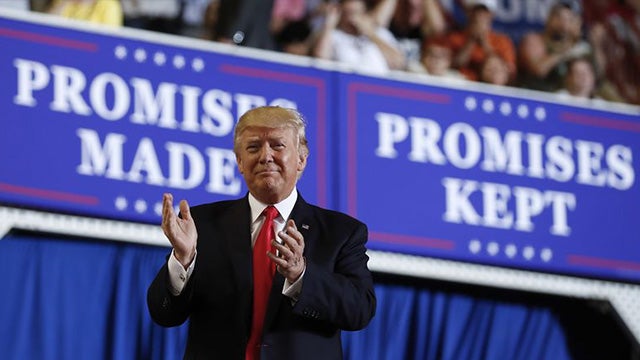 "Okay, fine. We're through shopping at your damn company, at your stupid store." We don't do that. It's beneath us. We've got more important things to do. We're not that kind of activists. So it's kind of a playing field that they own. Now, I hope Trump follows through on this, ICE beginning the process of removing millions of illegal aliens why have illicitly found their way here. There's news coverage of this all over the place. I hope this is something that we get to see. I hope. If it happens, I hope it's something that we get to see. "As Promised, Trump Slashes Aid to Central America Over Migrants --

"U.S. President Donald Trump’s administration on Monday cut hundreds of millions of dollars in aid to El Salvador, Guatemala and Honduras, after Trump blasted the three countries because thousands of their citizens had sought asylum at the U.S. border with Mexico. The plan will likely encounter stiff opposition in Congress. Lawmakers, including some of Trump’s fellow Republicans as well as Democrats, have chafed against the president’s repeated decisions to disregard spending bills passed by Congress, some of which" blah, blah, blah, blah, blah.

Meanwhile, the AP says that Trump actually is restoring half of the aid to the Northern Triangle countries that he cut in March because they are beginning to cooperate somewhat. So it's not all as dire. But this is something that I asked yesterday: Is the appearance of inaction on this gonna hurt him or not with Trump base voters? Is this something he has to follow through on and actually do even without Democrat or Republican Party support? I mean, to the extent that he can. Look, nobody's saying that he doesn't remain serious about it. That's not the point. But it is one of the key elements got him elected, and I think that's one of the reasons for the tweets last night is the realization, recognition.

And I would suspect that we'll hear something about this in the big rally.