CLAY: I am in Las Vegas, Buck, and immediately upon arriving — I landed at 10 — they implemented a mask mandate all over the city of Las Vegas at midnight. I arrived, I had two hours of freedom walking around in the casino with my wife without a mask on, and then at midnight, boom! The signs all came out. Mask mandate in full effect all over Las Vegas.

It feels like a perfect symbol for what is rapidly becoming an absolute donnybrook between covid mandates and people with brains as the Delta variant is the new Frankenstein and as a result, all of your freedoms that you have fought hard for over the last 18 months?

BUCK: When you have people in Washington, D.C., for example, who are masking up even in advance of the official mandate that’s going in place, and you had two people in two weeks die from covid in a city — as we talked about yesterday — of well over a half a million people. Now we’re seeing what we’ve known all along, Clay, with the folks that are with us here have known all along.

Which is that there is a strain — dare I say “a variant” — of lunacy that has been coursing through Democrat lockdowner minds for over 18 months, but now it’s unavoidable. Now they are showing it in a way where any normal person would say, “Hold on a second. What is going on here?” The CDC has this data that’s supposed to be released officially — I think it’s gonna happen as we’re on air here — where they’re addressing what they’re saying now is a big change in the war on covid.

And based on the early — the preliminary reporting on what this is the, it’s gonna tell us that, yes, there are some breakthrough infections. Breakthrough infections are overwhelmingly not very serious infections. The vaccines still work quite well in general overall based on this data. This is just the CDC data, for whatever it’s worth. But there’s panic. Why so much panic? In New York City, as I’m talking to you, just so you —

CLAY: I’m gonna be right in time for New York panic too.

BUCK: Gonna be masked up because it’s gonna be required for photos here together in New York City. He goes to Vegas the masks comes, he goes to New York, the masks come.

CLAY: L.A. I’ve literally left the People’s Freedom State of Tennessee, landed in L.A. just in time for their mask mandate, literally landed in Vegas two hours before the mask mandate comes here, and then next week on Monday night I’m going to get to New York, and the mask mandate is basically going to be in effect there. So here’s what I think we need to tell everybody all right? We’ve been telling you this was coming.

All right? Let’s use a little bit of data here. Social Security happening is the Delta variant is highly transmissible, and it is highly transmissible even for people who got the vaccine, right? According to the Washington Post story last night that broke a lot of the CDC numbers that they’re gonna give out later, they have found that people who get the vaccine can still spread the Delta variant in particular just like the unvaccinated can okay?

BUCK: But hold on. 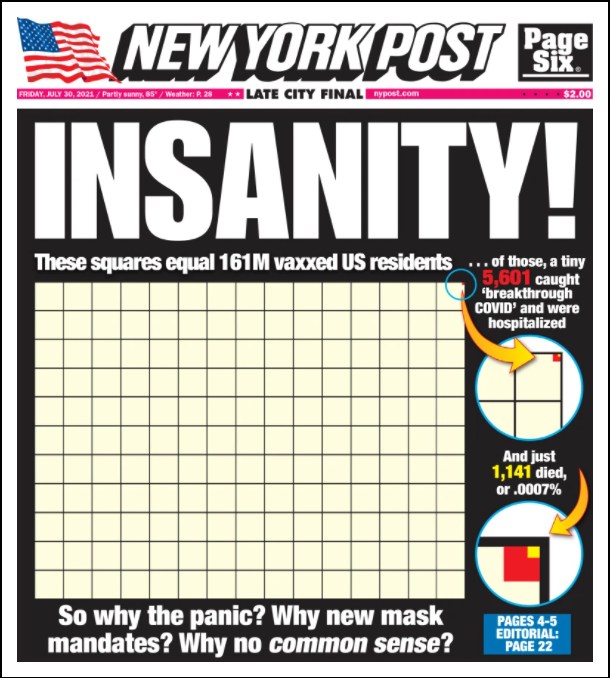 CLAY: And so if that happens — and, by the way, there’s an interesting study from, I think it was something like a family gathering where everybody was vaccinated and vaccinated people were able to spread it to each other, which is where all this comes from, okay, but we already have the data in some ways on this. You can look at England.

Let’s use England as an example. England had their freedom day I believe on July 19th where they effectively opened everything back up. And that was actually at the absolute apex of this Delta variant infection level in England. Since England has opened up, the overall number of infections have continued to decline and the positive is the amount of deaths and serious illness and all those things has not anywhere near approached the peak in the past fall, past winter.

So I think the data here is going to reflect — and I think you probably agree with me, Buck — there’s gonna be a mass rush to put masks in place to mask kids, all of this ridiculousness that is going to have virtually no impact on the Delta variant. It is going to spread in America. It is going to increase the amount of overall cases.

The amount of deaths, hopefully, is going to be low, because there’s lots of natural immunity and also a lot of people who’ve been vaccinated. This doesn’t change any of the advice that we’ve been saying on this show for a long time. If you’re over 65, go get vaccinated because your risk factors are infinitely higher. If you’re obese, go get vaccinated.

Then everybody else who’s younger and healthier. Would you agree with most of that, Buck? We try to be as honest as we can with our audience, not terrify you, let you know what’s going on with covid, treat you like reasonably intelligent adults — which almost no one else in media and certainly no one else in politics does.

BUCK: Yes. And what we see here is what I’ve been saying — and we’ve been talking about here, Clay, for the last week or so — is that the panic is actually being pushed by those who are at very, very low risk overall.

BUCK: They just can’t actually read numbers and data and be reasonable and come to fair-minded conclusions about what’s really happening here. It is not the unvaccinated who are the ones that are demanding masks and all these things, obviously. It is vaccinated people and so they essentially have here what is almost like a form of obsessive-compulsive disorder.

They’re taking the possibility of something and making it seem like there’s a reasonable fear for them to have when it’s absolutely not reasonable. That’s why I think it’s so important to remember that, yes… If we think of the vaccine almost like a barrier or a wall, dare I say, a Trumpian wall.

If you get infected, if it breaks through and your body has an actual infection of covid, then you can possibly transmit this in numbers that are higher than they anticipated. But there’s still, based on the data we’ve seen so far, breakthrough cases are still a pretty small percentage overall. Now, we don’t have perfect numbers on any of this but what we do have good numbers on are hospitalizations and deaths, and those are still very, very low.

You brought up, I think it was, in Massachusetts, I think it was in Cape Cod they had the big family study and this data may come out while we’re on air here together so we’ll tell you what’s in it. But the Washington Post was reporting on this group, and I think of the hundreds of breakthrough cases that we looked at there were almost none who went to the hospital.

I think maybe four or five, maybe six or seven went to the hospital. No one died and so now we’re all supposed to act like what, Clay? Like there’s gonna be a zero covid risk a zero covid future? That’s absolutely never going to happen. And I gotta tell you man you’re coming to New York next week so we’re gonna be here in the trench of the crazy libs together. Don’t worry. I’ll keep you safe. I know how they operate here.

BUCK: We’re gonna be in the crazy lib trench and trying to deal with all the incoming. De Blasio, the worst mayor in America — sorry, Los Angeles, we beat you on this one. The worst mayor in America is thinking about mandatory vaccines, Clay, to get access to any restaurant in New York City right now. That’s what’s being considered. What do we do then? I mean, they’re doing the full-on mandates through coercion that six months ago they’re saying, “No, no! We still believe in medical freedom.” No, they don’t.

CLAY: Well, let’s listen. Rand Paul, senator from Kentucky who is also a doctor, Buck and I just tried to walk you through it. But if you listen to this show regularly, we had Rand Paul on last week I think it was, Buck, and he was absolutely phenomenal walking us through analyzing the vaccine and everything else. Last night Rand Paul, was on Tucker on Fox News and he had this to say about the Delta variant. I think this is really good data. Listen closely.

That works out to .08%, less than the flu. That’s under age 50. Over age 50, it was about half as many people died as were dying last year. So the Delta variant is more transmissible but less deadly. But if you say that, Facebook will take you down. They’re chastise you, take away your birthday, and say you’re spreading mistruth. But it’s absolutely factual. The Delta variant is more transmissible but far less deadly than the virus from last year.

BUCK: You will get shut down on social media. It’s already happened. Dave Rubin got kicked off —

BUCK: — of I believe it was Facebook for saying something that was — I read it several times — entirely factually accurate at this stage. There are others who have had similar — I’ve had in the past, I’m probably gonna get in the next few days because Clay here’s where I think we really are. The most hysterical and most authoritarian have gotten their way for so long that their panic is just now central.

They can’t get away from it. This has become normalized in their brains; their emotional disturbance is now supposed to affect all the rest of us too. We can’t… ‘Cause I still stand by what I’ve been say for the last few weeks which is that you’re gonna see this big surge in cases.

And then you’re gonna see a big drop-off probably about mid-Augusts and everyone, oh, and they’re gonna say, “It’s because of the masks,” which is crap and they’re gonna say it’s because of the Vegas restrictions and L.A. and New York. It’s not true. That’s not the reality. But if we don’t fight this battle now when we go into the winter, now we’re talking straight-up lockdowns, business closures, in a preemptive fashion from these Biden-voting lunatics. And that’s what we have to fight against.

CLAY: And not only that, by the way, Australia — Did you see this? — has called out their military.

This story originally appeared in Clay Travis and Buck Sexton

About The Clay Travis and Buck Sexton Show