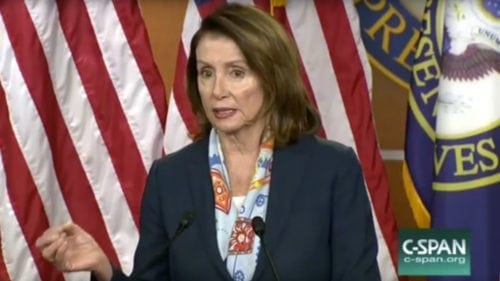 Nancy Pelosi viciously and erroneously attacked President Trump during her weekly press conference Thursday, falsely claiming the President referred to “undocumented immigrants” as “animals” and questioning his faith in “divinity.”

The House Minority Leader was speaking with reporters when she mentioned the President’s comments made earlier this week; apparently unaware he was specifically referring to MS-13 gang members currently residing in American prisons.

“When the President of the United States says about undocumented immigrants, ‘These aren’t people; these are animals,’ you have to wonder: does he not believe in the spark of divinity. The dignity and worth of every person?” asked Pelosi, questioning the President’s faith.

About The Sean Hannity Show